Home › Education & Employment › Is China’s basic education a success, or does it destroy the morality of society?

Is China’s basic education a success, or does it destroy the morality of society? 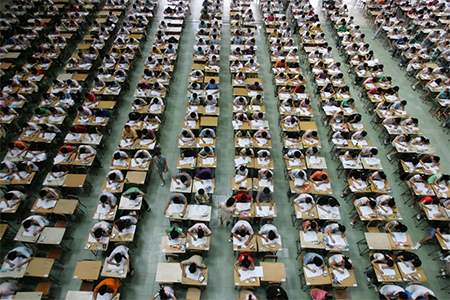 Chinese educators and education experts believe China has extraordinary basic education. They think this education gives millions of students solid knowledge and basic skills, which is the point why our education is good. The experts think the only failure of Chinese education is at university level.

They criticise the poor higher education system as the reason for the lack of creativity in China. It is apparent that Chinese experts are illogical again: innovation is a matter of human achievement rather than the vacant framework of an uninspiring system. If the students are so “extraordinary”, why do they choose to spend their college life sleeping and playing computer games, but have no idea about how to use knowledge?

Chinese experts are propaganda tools of China’s system, with no regard of the disadvantages and people’s complaints. They say China’s basic education is good for students and it can foster many intelligent people. Of course, they are against western style education, especially USA style, because the happiness in studying can’t give students enough basic skills. That is the remarks of so-called Chinese experts.

About seven or eight years ago, those who went abroad for higher education were students who couldn’t manage to achieve a good college entrance exam result in China. However, after 2010, the trend turned to another direction: the ones who are quite clever and good at study go to the west for better education. In the top  20 high schools in China, the top 5% or 10% of students choose to give up Chinese style basic education.

Many students in China also go to international schools in Beijing or Shanghai to continue their basic education and then go to college in other countries. It is said most of the top students in middle schools in cities like Beijing, Shanghai and Guangzhou abandon their Chinese style education after high school. Most of the Chinese parents who have sent their children to schools overseas or to international schools in China praise that their kids become more confident, that they get more interested in study and are able to acquire knowledge by themselves.

Of course, with motivation and interest, they get more skills and knowledge than common Chinese style students get. A more obvious trend is: once parents get richer than before, they will send their children to receive western style education, or at least go to China based international schools. All the facts above indicate that though Chinese experts are still singing anthems to China’s basic education features, the Chinese public have lost their faith in it. They don’t recognise any of the supposed superior features of China’s education.

Just like experts claim, China’s basic education does give students more skills and knowledge – that at least seems to be right. However, as we know, China’s education system is an exam-oriented system. All skills are aimed at coping with countless types of exams.

This model has this effect in China: the schools, especially middle schools, become factories. Most Chinese middle schools simply force students to recite all the knowledge points so they can enter a good college, which is in turn is seen as an advertisement of middle schools success. What Chinese high school kids do is just deal with thousands of exam papers and become skilful on how to pass exams.

Most of them, however, have no knowledge at all. Math, for example, gives the illusion that Chinese students are superior. They can calculate numbers quickly. However, the calculator ruins the possibilities for Chinese students. The questions met in industrial projects are quite different from those on Chinese style education paper, and the graduates lose contact with reality.

In real-life projects, students are unable to use what they have learnt to solve real-life problems. So there is no wonder that Chinese students can’t do anything after such a long time of exam-oriented studies. Many students say, what they get in the six years middle school time is just how to deal with over difficult exams. No real skills.

Another result, and the biggest problem driving so many Chinese kids away from China’s basic education, is the suppression of innovation. “Imagination is more important than knowledge” is a saying by Einstein recited by billions of Chinese, but Chinese education is afraid of imagination and innovation. This is because intensive training for doing exams can’t tolerate the students’ own original ideas.

It is true in China that a student deals with a physics question with his own knowledge and gets it right, but the teachers think it is wrong, because they don’t have the knowledge to know whether it is actually right. So they decide it is wrong. Chinese middle schools only teach students how to do exam questions and teach little about basic knowledge.Once students start their middle school, the teachers tell them how to “solve” a question using a rigid model. Any break from this rigid model is seen to be wrong.

Another part of innovation is imagination. When writing an article, if a student thinks the small letter “0” is a capital O or a ball, the teacher will be annoyed because it is just a lower case “0”. Any imagination on exam papers or writing works are marked as “unreasonable” by Chinese teachers.

What about innovation among Chinese students? In the contests of youth innovation, most works are just a copy or model of writings or models which have previously been created by someone else. The students just make what others have done “more beautiful.” What about imagination? I once watched a TV interview of a group of Beijing middle school students, about imagining a new type of machine. All of them were top students. Their imaginations were: a machine that could fly; a machine that could dive into the sea; a machine that could go into space… What they imagined are much older than themselves!

China’s students are trained like factory workers, getting many skills in doing exams, which are deemed as high value for China’s education system by Chinese experts. What have children lost during this education process? I think the extreme chaos of morality in China has close contact with the basic education.

Basic education should give students basic morality and scruples, but our education fails to do so, because Chinese schools claim publicly that the only purpose of life is making good grades in exams! Students have to find bizarre ways to complete exam papers. They  and don’t tell others to complete exams, because they think if they share their ideas with others, others will acquire the skills they have, and the surpass them in exams. China’s basic education has already twisted the social morality at school.

The education system has not only ruined the basic morality of society, but it has also ruined individuals. There are two factors: the first is personality. The age during 13-20 is a time to form a person’s personality. They are the golden days to think of society and broaden views. Unfortunately, 13-20 is just age in the factory for Chinese students.

Chinese educators can’t tolerate students to studying skills, except to deal with exams. Educators demand that students set “entrance to good universities” as their only goal in life. Thus, after many years of China’s basic education, Chinese kids become narrow-minded and vacant. That’s why most Chinese top students only play games, read internet novels and sleep after entering top universities – because they have no goal in their life after the college entrance exams.

During their teenage years, they’ve never considered about what they can contribute to society, what is available in the world and what they want to do after graduation. Of course, after six years concentration on exams, they have little information about what the outside world looks like. After an exam-oriented battle, they have nothing to pursue. That’s why Chinese universities are also corrupted and stagnant – because the students sent from basic education are all in such a terrible condition.

Another personality trait is confidence. It is well known that Chinese kids lack confidence, because our education system is in favour of denying students. Our educators aren’t willing to praise students when they’re doing good, and Chinese educators ignore the needs of individual students, often eliminating individual needs in the name of collectivism.

The order from the school in the name of collectivism is often indeed beneficial to the needs of school leaders, which is in turn asking students to be the slaves of the schools. With restriction of new ideas and too much criticism, one  can’t imagine the kids under this condition can be confident.

The second is study ability; exam ability is completely different from study ability. Study ability asks students to study new knowledge by themselves, and to use the knowledge they learnt to resolve real projects in industry. However, the six years exam training means most Chinese students have no idea about how to study.

I know a student who were ranked high in a Beijing public middle school. He could deal with any difficult exam questions swiftly. When he entered Edinburgh University after high school, he gave it up within a year after starting, because he couldn’t study what teachers asked him to by himself. During a laboratory project, he had to work in the lab for whole day and night, while native students could do it in a short time, because he didn’t know how to use knowledge to deal with new things.

The worst thing was, Chinese education only taught him how to be skilful, but never taught him the logic behind knowledge, which was a barrier to innovation. He is a typical Chinese “top student.” Chinese educators often say western primary schools and middle schools teach little to students – that’s a big lie. Western education teaches students a lot about the basic skills of daily life, such as CPR and so on. They teach little about knowledge itself, but give a lot of time for students to explore.

As far as I see, basic education means teaching students basic study methods and basic scientific logic, instead of training students like basic workers or basic machines. That is an exposition of why western students become far more successful than Chinese students after completing their education.

Chinese experts are famous for their ignorance and loss of conscience, thus their remarks are against the needs of this country. Most Chinese parents have recognised that China’s basic education has lost its “miracle” status. An education mode which has made people heartless, vacant and automated in skills like bottom workers is not a success at all, but a gigantic failure!