Home › Politics & Law › Do not threaten us, India tells China

Do not threaten us, India tells China 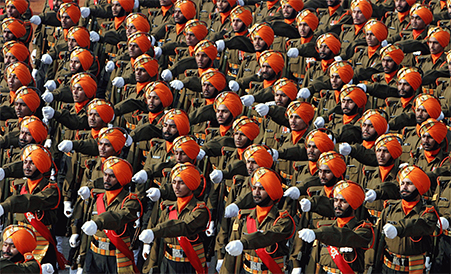 After China expressed concern over India‘s plans to build a 2,000-km road along the international border in Arunachal Pradesh, Home Minister Rajnath Singh hit back saying nobody should threaten or warn India.

Addressing the 30th Raising Day ceremony of the National Security Guards in Manesar, Rajnath Singh said, “No one can give a warning to India. India is a powerful nation now.”

“As far as China is concerned, both countries should sit together and discuss the issues,” he said.

China’s objection came after Minister of State for Home Affairs Kiren Rijiju said that there were plans to construct a 2,000-km-long road along the international border between Mago-Thingbu in Tawang district and Vijaynagar in Changlang district of Arunachal Pradesh.

In September, India eased curbs on building roads and military facilities within 100 km of the contested border in remote Arunachal Pradesh, so as to hasten construction of some 6,000 km of roads.

The move came as Chinese President Xi Jinping visited India, in a bid to defuse the deep distrust between both countries, despite growing trade and business ties.

A senior official in the Indian home ministry’s border management department said the ministry was seeking cabinet approval for the road in Arunachal Pradesh and had preliminary support from the prime minister’s office.

The road will run from the key town of Tawang in the northwest to Vijanagar in the far east and is expected to cost Rs 40,000 crore.

“The minister of state has conceived the idea of building a road that could be about 2,000 km long. The project has not been given cabinet approval but the preliminary nod from the PMO has come,” said the official who asked not to be named because he was not authorised to speak to the media.

“China has already spread their network of roads and rail network near the border. Whatever we make on our territory should not be a concern of China.”

“The border issue between China and India is a problem left over by the colonial past. Both China and India need to work together to solve this problem,” he told a daily news briefing.

“Before the border problem is solved, we hope the Indian side will not take any action that could further complicate the relevant issue, so as to preserve the current situation of peace and stability in the border area and create conditions for the final settlement of the border issue.”

Last month, India and China agreed to pull back troops ranged against each other on a remote Himalayan plateau on the other side of the country from Arunachal Pradesh, ending their biggest face-off on the disputed border in a year.

The two armies had mobilised about 1,000 soldiers each in Ladakh, each accusing the other of building military infrastructure in violation of a pact to maintain peace until a resolution of the 52-year territorial row.

India has previously also announced plans to refurbish civil and military infrastructure in the remote mountains, but progress has been slow.

Source: Yahoo News India – No one should threaten or warn us, India tells China

Like Loading...
‹ Has China found the cure for Ebola?
Chinese school’s ridiculous claim of family relationship with US Nobel Prize winner ›