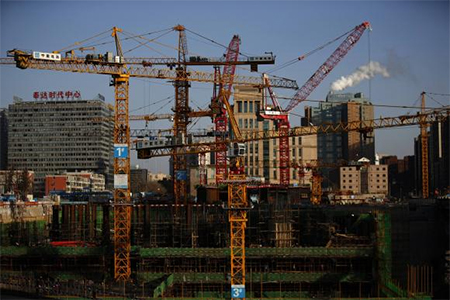 Cranes are seen at a construction site in Beijing

However, he knows he will encounter fierce opposition from the powerful conservative faction that wants China to be a military power stronger than the US. Their dream is reflected in senior colonel Liu Mingfu’s bestseller “China Dream: Great Power Thinking and Strategic Posture in the Post American Era.”

The reformists’ dream, however, is to conduct further reform for China’s peaceful rise in order to surpass the US economically.

That is why I said, “economic slowdown is precisely what Xi Jinping wants.” China will not regain its miraculous economic growth until Xi has successfully carried out his economic reform.

The following is the full text of Reuters forecast of China’s further economic slowdown in 2015:

China’s economic growth could slow to 7.1 percent in 2015 from an expected 7.4 percent this year, held back by a sagging property sector, the central bank said in research report seen by Reuters on Sunday.

Stronger global demand could boost exports, but not by enough to counteract the impact from weakening property investment, according to the report published on the central bank’s website, http://www.pbc.gov.cn.

The report warned that the Federal Reserve’s expected move to raise interest rates sometime next year could hit emerging-market economies.

Fixed-asset investment growth may slow to 12.8 percent in 2015 from this year’s 15.5 percent, while retail sales growth may quicken to 12.2 percent from 12 percent, it said.

Consumer inflation may hold largely steady in 2015, at 2.2 percent, it said.

Economists who advise the government have recommended that China lower its growth target to around 7 percent in 2015.

China’s employment situation is likely to hold up well next year due to faster expansion of the services sector, despite slower economic growth, said the report.