Home › Defence & Aerospace › China’s bizarre tirade at US supply of frigates to Taiwan; US only wants to make money because of reduction in military budget

China’s bizarre tirade at US supply of frigates to Taiwan; US only wants to make money because of reduction in military budget 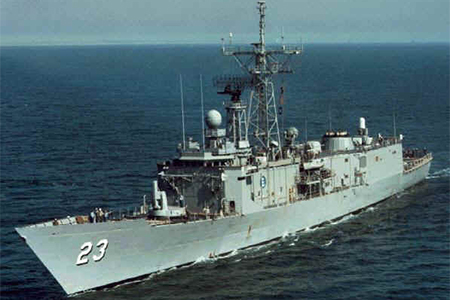 The following is a translation from Chinese media:

The United States’ supply of four Perry class frigates to Taiwan has become a hot topic, but a People’s Liberation Army major says that even with such weapons, Taiwan lags behind China by two decades. He especially pointed out that Perry class frigates are outdated warships that the US is decommissioning and selling, to get some funds and ease the effect of the reduction in the US military budget.

However, even if the US is willing to sell Taiwan some really advanced weapons, it will take time for Taiwan to learn how to operate them and provide logistic services for them; therefore, the US is unable to help Taiwan if a war breaks out now.

Over the past decade, The PLA has commissioned many advanced weapons and set up a combat system far  superior to Taiwan’s. The war now will be of a larger scale that Taiwan can afford.

If the war across the strait emerges in the future, China is enhancing its military strength much faster than Taiwan. Taiwan will be hopeless especially when China has commissioned its J-20 stealth fighter jets and hypersonic weapons, and built its homegrown aircraft carrier.

According to the major, China wants a peaceful solution of the Taiwan issue. For that purpose, China has to develop its military to make it far superior to Taiwan’s.

The US knows well that it is unable to help Taiwan but only wants to make money by selling some outdated weapons to Taiwan. Taiwan knows well such weapons cannot help, but at least the sales show that the US is on its side. That gives Taiwan a false sense of security.

Source: qianzhan.com “Major: PLA looks down on Perry, Apache not even if US provides Taiwan with such weapons for three more armies” (summary by Chan Kai Yee based on the report in Chinese)