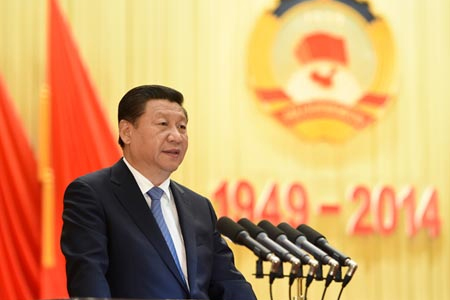 Xi Jinping delivers a speech in Beijing on Sept. 21, 2014 to mark the 65th anniversary of the founding of the Chinese People’s Political Consultative Conference. (Photo/Xinhua)

President Xi Jinping of China and his top graft-buster Wang Qishan may be targeted by assassination attempts from corrupt officials who have been allegedly buying high-powered sniper rifles from the United States, reports Boxun News, a US-based citizen journalism outlet with a reputation for releasing “insider” reports on Chinese politics.

According to a Boxun reporter in Hong Kong, recent raids on the homes of more than one corrupt official unveiled evidence of a revenge plot to assassinate Xi and Wang with American sniper rifles.

Xi, who launched an ongoing campaign to take down all corrupt officials — regardless of whether they are lowly “flies” or high-flying “tigers” — back at the start of 2013, has reportedly been bolstering his security detail over the last six months after the conspiracy came to light, Boxun said. Safety measures at outdoor appearances have also been upgraded, with even vice-ministerial-level officials needing to pass security checks, Boxun said.

This is not the first time Xi’s life has been at risk, said Boxun, which previously published claims that fallen tiger Zhou Yongkang had twice tried to take Xi’s life back in 2013, shortly after the Communist Party chief ordered Wang, chief of the Central Commission for Discipline Inspection, to look into the rumors of corruption that have long plagued China’s former oil and security tsar.

The two assassination attempts were said to have taken place around the time of the annual Beidaihe leadership conference in north China’s Hebei province. The first involved a time bomb hidden in a meeting room, while the second was a poison needle during a health check at Beijing’s 301 Military Hospital, Boxun said.

Xi was able to evade death on both occasions, and as a result the 72-year-old Zhou, a former member of the Politburo Standing Committee, was expelled from the party in December and will become the highest-ranked Communist Party official since the Cultural Revolution to be prosecuted for corruption.

Bo Xilai fell in early 2012, after his police chief Wang Lijun went into the US Consulate in Chengdu to demand protection. Bo and Zhou Yongkang had a secret plan to take down Xi Jinping by killing him and performing a coup d’etat. Since then, Zhou became a target of investigation and lost most of his power as the security csar. Zhou must have been desperate to get rid of Xi to save himself.

All these plots also involved his personal assistant and guard, Tan Hong, who was also arrested on Dec 1st.