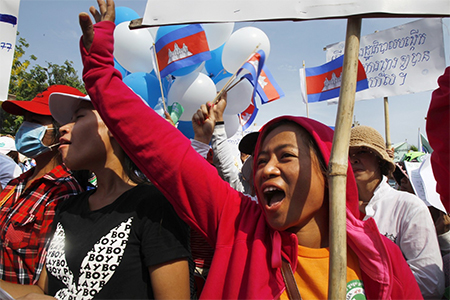 Cambodian garment workers staged a rally to demand higher wages and better working conditions during a gathering to mark May Day celebrations in Phnom Penh, Cambodia in May 2015. (Heng Sinith/AP)

Faced with slower growth at home and rising labour costs, Chinese entrepreneurs are seeking foreign markets as never before.

But as they rush abroad, they are grappling for the first time with unruly trade unions, independent courts and meddlesome journalists.

And for many, navigating the unfamiliar waters of multiparty politics and confronting the power of public opinion makes for heavy going.

As they venture into foreign democracies, many Chinese companies experience culture shock.

Having made their money in a one-party state, where political connections are the key to a successful business and the rule of law is easy to sidestep, they are finding things just aren’t as simple abroad.

From the United States to Asia, Chinese entrepreneurs have a litany of complaints and have made a succession of costly mistakes. Even in tiny Cambodia, where China has become a major investor in the garment industry, they can sound bitter.

“Trade unions are all the same: They are black-hearted,” complained He Enjia, president of the Textile Enterprise Association of the Chinese Chamber of Commerce in Cambodia.

“In the last two years, things changed in Cambodia,” he added, explaining that factory owners used to be able to hire police to suppress striking workers. “Now it’s impossible. The influence of the opposition party is growing, with the help of the Western media.”

By some measures, outward investment from China outpaced foreign investment into the country for the first time last year. But abroad, where the public often demands greater transparency and courts enforce stricter environmental and labour laws, it is a steep learning curve for many Chinese companies, experts say, that mirrors the challenges foreign companies faced when they first entered China more than two decades ago.

“If you look at foreign companies going into China, it was extremely difficult for them to adjust,” said Thilo Hanemann, who tracks global investment flows at the Rhodium Group, a New York-based economic advisory firm. “Chinese companies are now going through the same thing, but it is even more complicated for them. The regulatory environment they grew up in is so vastly different than in markets overseas.”

The flow of capital out of China had begun to make it expensive for the country’s central bank to maintain the yuan’s value against the dollar. Last week’s surprise devaluation will push up the price of foreign investment for Chinese companies, but — if investors think the currency will weaken further over time — could encourage some to invest abroad now before the exchange rate falls further.

Some of the first major movers were state-owned companies, extracting the raw materials, such as oil and iron ore, that China needed to fuel its booming economy. Construction companies have also followed government money abroad, as China builds roads, dams and other infrastructure from Asia to Africa.

But, as rules governing outward investment have been liberalised, private companies, from garment manufacturers chasing lower wages in Southeast Asia to IT companies chasing new markets, are also moving abroad.

That would be a major milestone for China, even if the figures are not exactly reliable. In any case, Rhodium’s Hanemann said the hasty expansion abroad should not be seen as a sign that China is about to take on the world.

“It’s not a sign of strength; it’s a sign of weakness,” he said. In the past, Chinese companies could reap such handsome profit growth at home that “they neglected global value chains” and did not develop overseas expertise, he said.

But as China’s economy slows, as it confronts huge overcapacity in its steel and cement industries, and as labour and land costs rise, companies are being forced to diversify abroad, to “play catch-up” and learn new skills in order to survive.

It has not been smooth sailing. Indeed, there are countless examples of costly miscalculations.

In the United States, Chinese companies are facing hundreds of millions of dollars in damage claims over drywall imported to rebuild thousands of homes in the wake of Hurricane Katrina; it is alleged to have emitted toxic gas, caused respiratory problems and corroded electrical appliances.

In Texas, state-owned Aviation Industry Corporation of China (AVIC) is being sued for $7.5 billion by a former joint venture partner, Tang Energy, which claims it cheated on their deal to develop wind power — partly by creating competing businesses in the same field. It is something AVIC might have gotten away with at home but not in the West.

“In China, the state owns the enterprises, and it owns the court. So if you’re a state-owned company, you never have to worry about having a fair fight. And here they have a fair fight on their hands,” E. Patrick Jenevein III, Tang’s chief executive, said last year, according to the Dallas Morning News.

In Poland, China Overseas Engineering Group had its contract to build a highway in the run-up to the 2012 European soccer championships canceled after costs ballooned: The company had failed to allow, among many other things, for the cost of compliance with local environmental laws, including the need to build tunnels under the road for frogs to cross.

All over the world, Chinese companies have faced a political backlash for bringing in their own workers rather than employing locals — and for mistreating the locals they do employ.

There are, of course, very different problems in different places. Strict laws against pollution and corruption might pose problems in the West, but they are less of a concern in countries such as Cambodia, entrepreneurs say.

But Li Yi, secretary general of the Guangxi province branch of the Chinese Chamber of Commerce in Cambodia, says Cambodia’s many nongovernmental organizations are a nuisance.

“To grab Western funds, they do everything they can to pick holes and deliberately target big projects,” he said.

There are cultural differences, too. Chinese managers complain that Cambodians are not as hardworking as Chinese, but their heavy-handed efforts to increase productivity are not always successful.

In June, a Chinese construction site manager was reported to have screamed at his workers once too often for being lazy, according to the Phnom Penh Post. After their shift was over, a group of workers returned to the site at night and hacked the manager to death with an axe, police told the newspaper.

Li said that at least the business culture here is similar when it comes to bribing officials — Cambodians, he said, usually keep their word, unlike their counterparts in certain other countries. “They take money, and they keep their promise,” he said. “If they can’t do something, they say so directly. Not like some officials, who take money but then say they can’t help.”

In Burma, the transition from military rule to military-controlled democracy brought problems for Chinese mining and dam-building companies not used to a world where public opinion suddenly mattered.

Li Guanghua, general manager of the China Power Investment Corp., said his company learned painful lessons from the suspension of the Myitsone dam project in 2011, after questions about its environmental impact, and whether Burma would see much of the benefits of the dam, turned public opinion strongly against the project.

Now the company is being more careful to talk to local communities, opposition politicians and the news media as it tries to get the project restarted.

“We think transparency is very important now,” he said in an interview.

But have other Chinese companies learned that lesson?

“I can’t guarantee that,” he answered, with a smile.