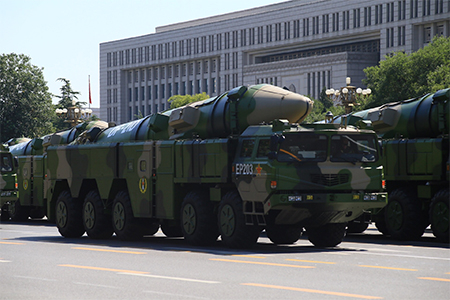 The following is based on a translation of a report on a Chinese news site:

Mil.huanqiu.com says in its report on the DF-21D ballistic missile, which China showcased for the first time in its military parade on September 3, that US spies are disappointed that the DF-21D looks the same as the other missiles in the DF-21 family

China’s DF-21D anti-ship ballistic missile is a well-known aircraft carrier killer that China has spent years to develop, entirely on its own.

The report says that US spies know well that there are a series of difficult technologies to tackle for a ballistic missile to hit a moving target more than 1,000 km away (the DF-21D’s range is 1,500 km).

The report officially reveals for the first time that the DF-21D uses better technology and materials than other missiles in the DF-21 family that imbue it with the capabilities of quick response, strong penetration, precise detecting and tracking of target and precision strike.

The report continues that what what worries US spies most is the DF-26 anti-ship ballistic missile showcased in the parade.

According to British Jane’s Defense Review, the DF-26 has a range between 3,000 and 4,000 km that enables it to sink US aircraft carriers near the US navy base in Guam.

The report also says that, like the DF-21D, the DF-26 can dive from out of atmosphere perpendicular down to the flight deck of a US aircraft carrier and penetrate its armour. It is utterly impossible to intercept the missile with existing technology.

There was official confirmation during the parade that the DF-26 has the capability to hit a large surface warship.

The report quotes Chinese missile technology expert Yang Chengjun as saying that the DF-26 has adopted a lot of brand new IT, measuring and guidance technologies to enable it to have the capabilities to hit various static and moving targets.

It can carry either a nuclear or conventional warhead. It is a mobile missile that can attack without support from other systems.

Source: mil.huanqiu.com “DF-21D perhaps disappoints US spies: DF-5B more powerful than DF-31A” (summary by Chan Kai Yee based on the report in Chinese)