Has North Korea’s Kim Jong-un replaced John Boehner as Speaker of the House? 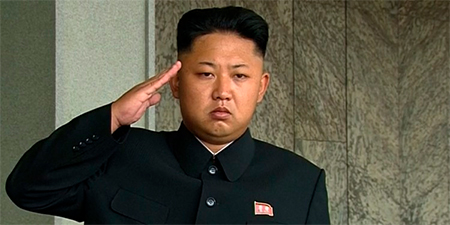 We have met the enemy and it is us: we have become too tired to be effective and hence are becoming indifferent. The charade on Capitol Hill continues, and not only about the nuke “deal” with Iran. Will the carnival end before it’s too late, or will Obama continue to win?

The House speaker is elected by all House members, not just those of the majority party. He need not be a member of the House. Boehner having resigned because a serious medical condition often reduces him to tears, one group of Democrats nominated Debbie Wasserman-Schultz to replace him.

However, due to her support for Hillary Clinton, she fell out of favour with the White House so another group of Democrats nominated Kim Jong-un at Obama’s request. To avoid the appearance of confrontation, Republicans offered no candidates. Kim won by seventeen votes, becoming the first non-US citizen to hold the office thus far this month.

The current upset was precipitated by Republican members’ disagreements with Boehner and other party leaders about how best to deal with the catastrophic Iran nuke “deal” without unnecessarily offending the President. Kim Jong-un is expected to substitute his own brand of leadership for Boehner’s leadership through ambivalence.

A majority also deemed Kim the best qualified to negotiate with Dear Leader Obama on behalf of the House because, as the undisputed leader of a rogue nuclear nation himself, he should be able to pull not only Obama’s strings but also those of the Supreme Leader of the Islamic Rogue Republic of Iran.

White House Press Secretary Josh Earnest declined comment on the situation beyond refusing to comment on whether Obama met privately with Kim to congratulate him. However, Obama is generally thought to have confirmed that he fully supports Kim’s way of governing his own Democratic Peoples’ Republic and — subject to the few pesky restraints still imposed by an antiquated Constitution that he has not yet found ways to sneak around — he does his best to emulate him. In that connection, Obama asked Kim for recommendations on antiaircraft guns to deal humanely with Jews and other traitors who oppose him (Please see also, New York Times Launches Congress ‘Jew Tracker’ – Washington Free Beacon.)

Desiring to gain Obama’s total good will, Kim promised to have derogatory cartoons of Donald Trump and Hillary Clinton painted on all future North Korean nukes and missiles just before they explode. In return, Obama promised to issue executive orders granting North Korea the permanent right to declassify any and all U.S. documents it sees fit pertaining to the security of the United States and to obtain copies, gratis, from the Government Printing Office.

House Speaker Kim Jong-un will next meet with Supreme Leader Khamenei in Tehran to make two common sense proposals, with which Khamenei is certain to agree:

First, Kim will propose that a group of highly regarded North Korean nuclear experts — under his personal guidance and supervision — conduct all nuke inspections in Iran and draw all conclusions concerning any past or present Iranian nuclear program based on them exclusively. Those conclusions will be drawn on behalf of, and in lieu of any conclusions drawn by, the International Atomic Energy Agency (IAEA). The head of the IAEA, Yukiya Amano, immediately endorsed this plan as “splendid and totally consistent with any and all IAEA – Iran “secret deals.”

Second, Kim will propose that Khamenei promise not to nuke anyone until all sanctions have been permanently eliminated, unless he really wants to.

Obama is thought to have agreed with every aspect of the Kim plan and to have directed Secretary Kerry to tell Khamenei that if he agrees all sanctions will be eliminated permanently, via executive decree, and hence even more expeditiously than previously expected. Due to a successful Senate filibuster yesterday, Obama can issue the executive decree very soon; Today — Friday, September 11th — is being considered seriously due to the obvious symbolism of the date.

H/t Freedom is just another word

The inevitable success of Kim’s mission will result in a win-win situation for nearly everyone, particularly the financially strapped IAEA, and the true Peace of Obama will prevail throughout all parts of the world that he considers worth saving. Remember — it’s all for the Children!

My dear North American friends, it is my sincere hope that your life under President Obama has prepared you well for your future life in what will soon become the Democratic People’s Republic of Amerika. Barry [a.k.a. Barack] and I have worked long and hard together to acclimate you gradually to our transformed and transformational form of governance and hence to make the transition as smooth and painless as possible for those pleased to submit. Now, we will accelerate the progress.

It does not have to be that way. Here, in closing, are a few words from Daniel Greenfield.

We are not savages and feral children. We are the inheritors of a great civilisation. It is still ours to lose. It is ours to keep if we understand its truths. [Emphasis added.]

We are not alone. A sense of isolation has been imposed on us as part of a culture war. The task of reconstructing our civilisation and ending that isolation begins with our communication. We are the successors of revolutions of ideas. We need to do more than keep them alive. We must refresh them and renew them. And, most importantly, we must practice them.

What we have now is not a movement because we have not defined what it is we hope to win. We have built reactive movements to stave off despair. We must do better than that. We must not settle for striving to restore some idealized lost world. Instead we must dream big. We must think of the nation we want and of the civilization we want to live in and what it will take to build it.

This is the America we live in now. But it doesn’t have to be.

It can be up to us, not to those who hate America and all for which she once stood.

Source: Dan Miller in Panama, Kim Jong-un has replaced John Boehner as Speaker of the House