China uses foreigners’ televised ‘confessions’ to serve its own ends 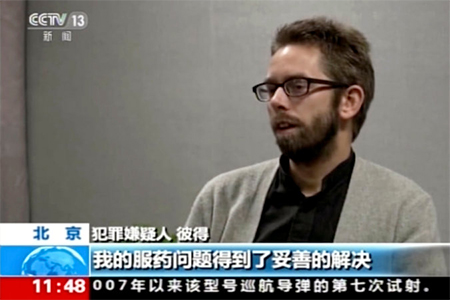 A still image of Peter Dahlin, a Swedish co-founder of a human rights group, taken from a video shown on China Central Television on Tuesday night.

For seven years, the young Swedish man had directed a nongovernmental organisation in Beijing that offered legal aid to Chinese citizens in trouble. Now he was a captive of China’s legal system, forced in police detention to speak on video about his so-called crimes.

“I have violated Chinese law through my activities here,” Peter Dahlin, 35, said in the video aired Tuesday night by China Central Television, the official state network. “I have caused harm to the Chinese government. I have hurt the feelings of the Chinese people. I apologise sincerely for this, and I’m very sorry that this ever happened.”

Though foreigners in China have long been forced to make back-room confessions when detained by the police, this recent string of televised self-criticism, under the hard-line rule of President Xi Jinping, has struck many people here as remarkable because of the manner in which the videos were used as Communist Party propaganda for an audience of hundreds of millions. For many, they evoked Mao-era public self-criticism sessions. There have been notable televised confessions by Chinese, too.

Beyond continuing the historical pattern, what is the party aiming to accomplish with these videos? And are they effective?

“This is a pageant, designed to demonstrate the party-state’s authority over individuals, pure and simple,” said Joshua Rosenzweig, a lecturer at the Chinese University of Hong Kong. “These cases are part of the leadership’s effort to take firmer control over spaces and actors in society that had grown too independent and critical under Hu Jintao,” Mr. Xi’s predecessor.

Mr. Dahlin’s detention came during an official campaign against civil rights lawyers, as well as journalists and civil society activists.

Regularly broadcasting confessions, Mr. Rosenzweig said, “creates the impression of a pattern of illegal activity” and a sense that the party is taking steps to combat it. The most important feature of such videos, he said, is to show “that the participants themselves now see the error of their ways and hold the correct views.”

In China, criminal prosecutions often depend on confessions obtained by the police, and the use of torture and coercion is widespread. It is unclear under what circumstances Mr. Dahlin spoke. He has Addison’s disease, a hormonal disorder, and needs daily medication. His organisation denounced the confession as forced.

In the case of Mr. Humphrey, a British citizen who was detained while conducting business research for the drug maker GlaxoSmithKline, the police denied him medical treatment for a health condition in order to force him to confess, he said after he had been deported. He confessed to illegally obtaining the private records of Chinese citizens and selling the information to clients.

As for Mr. Xue, he was detained during a crackdown on influential opinion-makers whose microblogs had millions of online followers.

Mr. Gui, the Swedish co-owner of a Hong Kong publishing company, was shown on Chinese state television saying he had returned to China to turn himself in for violating probation from a fatal drunken-driving episode from 2003. He had vanished last October from a home in Thailand and is among five Hong Kong booksellers who have disappeared and are presumed to be in the hands of mainland Chinese security officers.

“Such televised confessions are not following any due process to ensure that the persons concerned could be given any chance to have a fair trial,” said Patrick Poon, a researcher at Amnesty International.

Mr. Dahlin’s confession, he said, was part of the party’s efforts to restrict the activities of foreign nongovernmental organisations and their Chinese partners.

“By accusing a foreigner who works with an NGO of committing an ‘endangering national security’ offense, this will also give a chilling effect to foreigners who want to work for NGOs in China in the future,” he said.

Mr. Dahlin’s confession has already prompted anxious discussion and speculation among NGO employees in China about the party’s red lines. Such fears dovetail with a proposed law that would force foreign NGOs in China to register with the Public Security Bureau and disclose details of their spending.

The United States criticised China on Thursday for what a State Department spokesman described as “the growing number of people” who “appear to have been coerced to confess to alleged crimes on state media, often before the commencement of any trial or the announcement of any charges.”

“Some of these people have not been afforded legal or consular representation, and there are also instances in which foreign nationals appear to have been brought to mainland China against their will and by extralegal means,” said the spokesman, Mark C. Toner. “These actions undermine China’s claim to be a rule-of-law society and run contrary to China’s human rights commitments and hinder its attempts to build a more transparent and effective justice system.”

Chinese citizens are also often shown in recorded confessions broadcast on state television. Three students of Ilham Tohti, an ethnic Uighur economics professor sentenced in 2014 to life in prison for his statements about the Communist Party’s ethnic policies, were shown in jailhouse videos talking about their teachers’ so-called separatist activities and their own complicity. The same year, Gao Yu, a 70-year-old journalist, was shown on China Central Television confessing to leaking secret documents abroad.

In the network’s segment on Mr. Dahlin, two of his detained Chinese associates denounced Mr. Dahlin and his organisation using intensely hostile language, similar to the way family members and friends living during the Cultural Revolution were forced to criticise each other.

“Now, I have deeply realised that this organisation is a pioneer station or a bridgehead planted by anti-China organisations that want to place eyes inside China in order to understand social problems at the bottom of the society,” said one young associate identified in the video by his surname, Wang. “He simply wanted to manufacture incidents so that when the time is mature, he could subvert political power and our party leaders.”

That language suggests that one goal of these videos involving foreigners is to stoke suspicion of outsiders — “black hands,” in party terms — and further fuel the China-versus-the-West mentality that Mr. Xi has been promoting.

It is less clear whether the videos are effective as propaganda. After seeing the video and state news reports, some Chinese have wondered whether Mr. Dahlin’s organisation was indeed nefarious.

Others have expressed scepticism. One person wrote on a microblog: “Why does this feel similar to what North Korea does? Using all possible ways to make dissidents confess in public.” Many liberal Chinese have noted online that a prominent rights lawyer, Li Fangping, has defended Mr. Dahlin by calling him the “Norman Bethune of the legal field,” a reference to the Canadian doctor who joined Mao’s cause.

David Bandurski, an editor at China Media Project at the University of Hong Kong, wrote in an essay last March that the party’s practice of self-criticism was borrowed from the Soviet Union in the 1940s. In the 1950s, officials forced many intellectuals to write letters of self-confession as a means of subjugating them to Mao’s ideas.

“In Xi Jinping’s new confessional movement, there are shades of the party’s troubled political past,” Mr. Bandurski wrote. “Questions of guilt and innocence are subservient to the imperatives of political power.”

“As in the past, today’s culture of confession is not about accountability, clean government or a rules-based system,” he added. “It is about dominance and submission. Xi Jinping is China’s confessor in chief. You serve at his pleasure.”