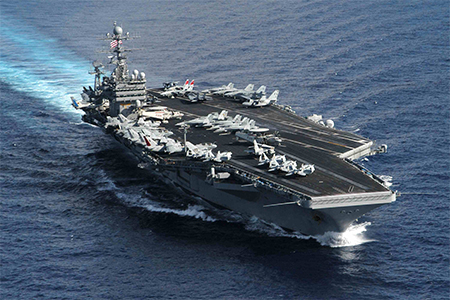 The US said Thursday it has launched joint South China Sea naval patrols with the Philippines, escalating its presence as it accused Beijing of “militarising” a region which is locked in territorial disputes.

In a show of strength, US defence secretary Ashton Carter also announced that 275 troops and five A-10 ground attack aircraft currently in the country for annual war games will remain in the country temporarily.

China warned deployments must not damage “regional stability”, but Carter said Washington’s efforts to strengthen its military role in the region was not done “in order to provoke”.

The Pentagon chief said the US was responding to regional anxiety over China’s muscular actions in the South China Sea, including building artificial islands over disputed reefs.

“Countries across the Asia-Pacific are voicing concern with China’s land reclamation, which stands out in size and scope, as well as its militarisation in the South China Sea,” Carter said.

The joint naval patrols, which began last month, “contribute to the safety and security of the region’s waters,” he said after meeting with Philippines President Benigno Aquino.

Manila has been improving its defence ties with the United States to help boost its ability to defend its territory.

China’s foreign ministry reacted coolly to the US deployment.

A statement read: “The military activities of the relevant countries should not be targeted at a third country, and moreover should not support the efforts of some countries to provoke China on issues of sovereignty and security, adding to regional contradictions and damaging regional stability.”

China claims most of the South China Sea, even waters and rocks close to the coasts of several neighbours that overlap with their claims.

Beijing has reclaimed several reefs claimed by Manila and built structures on them that the Philippines says are designed for military use — a charge China denies.

Earlier this month Chinese state media reported China has switched on a lighthouse atop a reconstructed reef in the Spratly chain, which also contains technology to monitor passing ships.

Carter announced that 275 American troops, among about 5,000 military personnel taking part in the annual Balikatan (shoulder to shoulder) war games, are to stay behind after the exercises end on Friday.

Five A-10C Thunderbolt ground attack planes and four other aircraft will also remain until the end of the month.

Some 200 of the US personnel are to train Filipino soldiers, as well as “conduct flight operations in the area, including in the South China Sea”, Carter said.

These activities will “lay the foundation for joint air patrols to complement ongoing maritime patrols,” he added.

The remainder of the US personnel will be stationed at a Manila military base on an unspecified “rotational” basis to form a “command and control” unit to support increased activities between the two allies, Carter said.

The deployments are part of a deal under which Manila has allowed American forces to rotate through five Philippine bases — some of them close to the South China Sea.

Philippine defence secretary Voltaire Gazmin welcomed the US announcement, adding he hoped the increased presence will “deter uncalled-for action by the Chinese”.

The US has campaigned on freedom of navigation in the strategic waterway. To drive home its point it has sent bombers and warships on patrol close to the Chinese construction activity in recent months, angering Beijing.

As part of the Balikatan exercises in the northern Philippines, US forces on Thursday fired missiles at long-distance targets as part of a simulated assault of imaginary enemy-held territory.

“The truth of the matter is we are allies and as allies, we need to work together,” Lieutenant-General John Toolan, the US Marine Corps Pacific commander told reporters.

Carter’s announcement Thursday came ahead of a decision this year by a United Nations-backed tribunal on a legal challenge by Manila to China’s territorial claims.

Like Loading...
‹ To deal with China, it should be strangulation, not bloodshed
Cadence of Conflict: Asia, April 18, 2016 ›