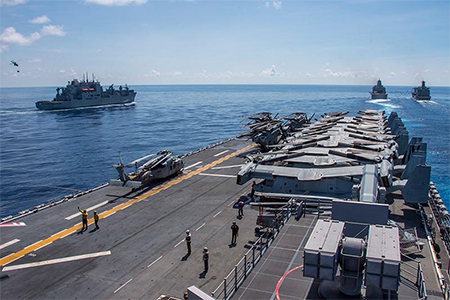 Philippines Defence Secretary Delfin Lorenzana said Friday that he told the U.S. military that plans for joint patrols and naval exercises in the disputed South China Sea have been put on hold, the first concrete break in defence cooperation after months of increasingly strident comments by the country’s new president.

Lorenzana also said that 107 U.S. troops involved in operating surveillance drones against Muslim militants would be asked to leave the southern part of the country once the Philippines acquires those intelligence-gathering capabilities in the near future.

President Rodrigo Duterte also wants to halt the 28 military exercises that are carried out with U.S. forces each year, Lorenzana said. Duterte has said he wants an ongoing U.S.-Philippine combat exercise to be the last during his six-year presidency as he backs away from what he views as too much dependence on the U.S.

Duterte, who took office in June, has had an uneasy relationship with the U.S., his country’s longtime treaty ally, saying in recent speeches that he wants to scale back the presence of visiting U.S. troops in the country, along with the annual bilateral military exercises.

But while some Filipino officials have walked back on Duterte’s sometimes crude anti-U.S. pronouncements — early this week he told President Barack Obama “to go to hell” — Lorenzana’s comments show for the first time that the Duterte administration will act by rolling back cooperation with the U.S. military in the Philippines.

Despite the difficult stage in the country’s relations with its former coloniser, Lorenzana remained optimistic that those ties would eventually bounce back.

“I think it’s just going through these bumps on the road,” Lorenzana told a news conference. “Relationships sometimes go to this stage … but over time it will be patched up.”

Duterte’s falling out with Washington will not necessarily spread to U.S. allies such as Japan, for example, which has committed to delivering patrol ships for the Philippine coast guard and has signed a deal to lease five small surveillance planes the country can use to bolster its territorial defence. The planes may arrive as early as next month, Lorenzana said.

The U.S. and Japan have helped the Philippines develop its capabilities to safeguard and defend its territorial waters amid China‘s increasingly aggressive actions in the South China Sea. Under Duterte’s predecessor, Benigno Aquino III, the U.S. and Philippine militaries twice staged naval exercises near the disputed waters.

The split in military relations comes as Duterte, who describes himself as a leftist politician, has lashed out against U.S. government criticism of his deadly crackdown against illegal drugs, which has left more than 3,600 suspects dead in just three months, alarming Western governments and human rights groups.

While taking a critical stance on U.S. security policies, Duterte has reached out to China and Russia. Lorenzana said he has been ordered by Duterte to travel to Beijing and Moscow to discuss what defence equipment the Philippines can acquire from them.