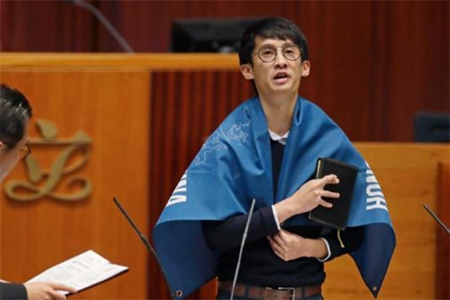 A swearing-in ceremony to kick off Hong Kong’s legislative session descended into a farce, as newly elected pro-democracy politicians intentionally mangled their oaths in a show of defiance against Beijing.

The MPs also displayed flags declaring that Hong Kong is not a part of China, and called out for “democratic self-determination” for the semi-autonomous Chinese city during the oath-taking session on Wednesday.

The protests foreshadow what is expected to be a chaotic term for Hong Kong’s semi-democratic Legislative Council after a group of youthful candidates were elected in September, swelling opposition ranks.

The new MPs represent some of a new wave grassroots groups that emerged from the wake of 2014’s massive pro-democracy street protests, which failed to win concessions from Beijing but sparked a rising independence movement and a political awakening in many young people.

Because all politicians were told “to stick to the exact wording, a constitutional requirement”, three of them had their oaths rejected.

“We’re yet to find out what punishment will prevail,” Clarke said. “The government has said that anyone who veers away from the exact wording would be punished, and this could mean the disqualification of these politicians from parliament.”

Sixtus Leung, 30, of the Youngspiration party draped a blue flag with the words “Hong Kong is not China” over his shoulders and crossed his fingers as he held a Bible while he spoke.

His colleague, Yau Wai-ching, laid the same flag on the table in front of her when it was her turn.

They recited the oath in English, but appeared to deliberately mispronounce the word China as Shina, an old fashioned Japanese term for the country that some see as derogatory.

Yau, 25, also appeared to insert a curse word into her oath.

The legislative clerk admonished them for not sticking to the proper wording and refused to accept their oaths.

Another politician, Lau Siu-lai, who founded her own party, Democracy Groundwork, recited the oath very slowly. She took about 10 minutes to repeat the declaration, which has less than 100 words, by pausing for a few seconds after each one, as the rest of the council chamber listened in silence.

Nathan Law, who helped spearhead the 2014 protests and is Hong Kong’s youngest ever legislator at age 23, prefaced his oath by quoting Indian independence icon Mahatma Gandhi vowing never to bend to authorities.

“You can chain me. You can torture me. You can even destroy this body, but you will never imprison my mind,” said Law, of the Demosisto party.

As he recited the oath, he raised his tone slightly when he mentioned the People’s Republic of China, in what some saw as a subtle way of turning the statement into a question about whether to bear allegiance.