Drafting peace in the Pacific 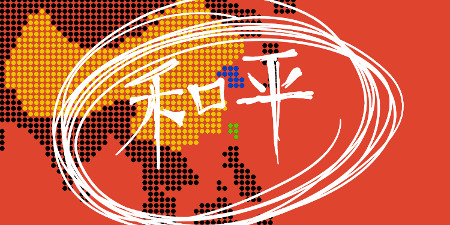 We no longer live in a world without alliances. Yes, individual nations retain sovereignty within their borders. However, the days are over when a single nation will boss and police an entire region alone.

One nation can no longer take out an “enemy” in another nation as the “lone ranger”. Any nation that tries will face scorn from others. If a government goes rogue, a plurality of other nations must intervene. This is international political gravity today.

We live in a world of growing alliances between sovereign nations.

China has been seeking respect and peace in its part of the world. The US has been seeking to cut off enemies before they have an opportunity to grow. In the Far East, the US’ solution has been to patrol freely in Asian waters. China’s solution has been to fly its national flag on more soil. Neither process will continue to work. And, if both processes continue, they will lead to unimaginable fallout, what some might think as WWIII, though still not that grand.

The solution to peace from the South China Sea to the Koreas is simple: Alliance. China needs to stop trying to be a so-called “nation” and return to its true DNA of an empire.

Korea needs to reunite. Only the South can help heal the North because no other nations are like those two.

The US’ role in the region, as well as China’s standing with Hong Kong and Taiwan, are in a struggle. The US needs to be a friend.

China has always been an empire. It’s own leaders up until just over 100 years ago were called “emperors”. China’s connection to Taiwan and Hong Kong was never that of a nation and its provinces, but of nations to their common empire. This is why attempting to “reunite” Taiwan and Hong Kong with China has proven to be difficult—one can’t “re-” do something that was never done. China’s goal of unity among Mandarin-speaking people and Han blood is not bad, it is quite good. The Chinese are a family. Though they disagree, though they live in many houses, they are still family. This is true and good.

The way to return the Chinese people to their rightful standing in history is for China to take the initiative of a leader and take advantage of the situation today. China needs to create the modern version of an “empire”—a new alliance among Chinese people.

In Taiwan’s most recent presidential election, the old enemy of the Communist Party, the KMT-Nationalist Party, was soundly defeated by the democratic process in Taiwan. For that and for peace, China could “declare victory” over the old government and recognize Taiwan as an independent State in return, on condition that the KMT-Nationalist Party be completely disbanded and its assets completely appropriated in a manner that China and Taiwan agree to. By declaring victory, China would prove its ability to win its own revolutionary war, thus legitimizing its own existence as an unquestionable State. By Taiwan recognizing China, no one would be able to question China’s legitimacy again.

China should then form an alliance with Taiwan to patrol the South Sea together in a new alliance, which both must pay into. Taiwan would become a member of the UN and China and Taiwan would agree on whatever to do with the man-made islands in the South Sea, having some kind of mutual ownership or alliance-like version of a “time share” or “condominium” arrangement. Then, no other nation could question the state of those islands since their waters would be patrolled multinationally.

In the China-Taiwan alliance, Taiwan would continue to buy military supply from the US and China would be able to make deals with Russia. Taiwan would be able to be “sovereign” but yet “interdependent” with China—which is not plain, traditionally viewed “independence”. It would have an alliance. In the mind of the West—and Westernized Taiwan and Hong Kong—an alliance is a much greater signal of unity than statehood. In the mind of the Far East, the Empire, not the State, has been the solution to peace. An alliance may not be the best option, but it is the most likely option for the longest-lasting peace to succeed, and will mostly likely include prosperity.

The students in Hong Kong, the “Umbrella” movement, has created much drama in the press about China. However right or wrong this may have been for either party, China could show its great strength by making a simple declaration: Hong Kong is a free country on one condition—Beijing supplies Hong Kong’s military and Hong Kong is considered China’s defensive zone. The basis would be that the resistance to China never requested its own military, even though requesting one’s own military is the key to any national independence. The Umbrella movement was never fully-fledged in the first place. Beijing would simply agree and give them just that. China would then double its presence at its military installations in Hong Kong. Then, Beijing could enjoy a military base rent-free and would remove all excuses for anyone in Hong Kong to complain. Dissenters would be instantly discredited and China would have impenetrable respect around the world. Hong Kong would also become a non-voting member of the new alliance, enjoying all of its benefits, just as China would also enjoy.

As for Korea, a multinational military force should be established to stabilize military peace. Chinese and American troops should keep a kind of cooperative presence as they arrange with Korea, once Korea becomes reunited with itself. Of course, the presence of either military would remain at Korea’s pleasure, but Chinese and Americans should agree that any presence would be equal in number between China and the United States.

In this “think piece” article of mere ideas, much more could be said and very much could be improved on. The model of a new Chinese alliance in the Pacific can help to address many of the problems and bring international stability, both within the Western Pacific itself and between the Western Pacific and the Western Hemisphere. We need to seek out the creation of newer alliances, not the acquisition of provinces. By pursuing alliances, everyone has progress and respect and no one loses face in the least.

The Pacific Daily Times does not endorse or oppose any foreign policy, nor does the Times criticize or interfere with other countries’ decisions. Domestic decisions must remain the choice of a nation, its people, and its government, not the press. The only opinion here is with regard to events whether past, future, or present, and the most likely roads between them. The mission and purpose of the Pacific Daily Times is to help everyone to know each other along that road, whichever road history may so choose.