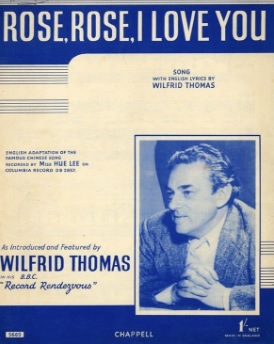 The Album Cover of ‘Rose, Rose, I Love You’ (photo from Sheet Music Warehouse)

Two Chinese movies are fostering destructive effects on cultural development and sublimation in China despite their recent box office success.

Another film ‘Operation Red Sea’ came to the market later and in just two weeks the box office has reached USD333.9 million on mainland, but merely $1 million in the United States.

They both are of the similar type to the American popular action movies about battles and superheroes. In short, fight, fight, fight. The solution to a conflict of interests between two parties is elimination of the ‘Other’ by bloody fights and weapons.

China, despite its gigantic market, is falling into the trap of non-stop violence, gun culture and alike. Should this brainless style go on, it would neither cultivate a new benchmark for art, nor yield echo from the peoples all over the world.

Such a sadness reminds me of the song “Rose, Rose, I Love You” recorded by American singer Frankie Laine. It was a well received song in the 1950s and its highest ranking on the American Billboard chart was #3.

This fine piece was actually composed by a Chinese musician Mr. Chen Gexin and first recorded by Ms. Yao Lee in Mandarin in 1940. When the song was brought to England by broadcaster Wilfrid Thomas, it attracted the attention of some people in the industry and then we had this in English ……

Although this song was the only ‘written-by-Chinese’ popular hit in the UK’s and US’ music markets, it means it is not impossible for some Chinese cultural items to appeal to the mass public overseas. If we trace back to history, it was chinaware, silk and tea that not just captured the attention of the Europeans but also transformed their daily lives in both cities and rural towns. The art of ceramics, for example originates from China and by now peoples all over the world are making both technological and artistic progress here and there.

Forget about the terms ‘Soft Power’ and alike. If there is a global role for the Chinese culture to play, it should be ‘Co-existence’ between strong and weak, between big and small, and between fast and slow, because the quest for win-win solution embodied in ancient Chinese philosophy is workable with the technologies nowadays. China does not need another version of “Self-vs-Other” or “us-vs-them” problem to be resolved by violence.

Take a look at ‘The Sound of Music’, ‘Gone with the Wind’, ‘Odd Couple’, ‘Titanic’, ‘Juno’, Charlie Chaplin’s classics …… Stories about love, friendship, social class problems all can make money as well. The key point is whether you can present it well. China’s peaceful rise can never materialize if the cultural artists keep on imitating the American violent subculture for earning quick money.