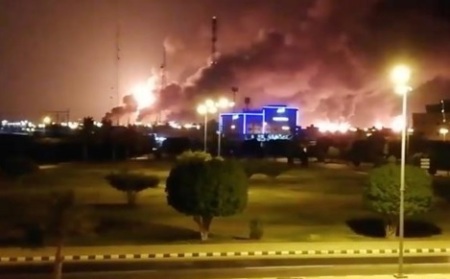 Smoke billows following an attack at an Aramco factory in Abqaiq, Saudi Arabia on 14 Sep 2019 (Reuters photo captured from Aljazeera)

First, Saudi is highly vulnerable. It seems there is a lack of sufficient military capacities of detecting intrusion, becoming alert to attack timely, and taking immediate reactions to protect the facilities, etc.

Second, Saudi did not get sufficient protection from the U.S. at least in terms of beforehand intelligence, satellite alarm during the attack, and post-attack counter-strike. Bear in mind that Saudi has been purchasing bulks of US military weaponry and systems for decades.

Third, the military capacity of the attacker, be it Yemen or Iran or someone else, is far beyond previous estimation, for example the precision.

A critical juncture — an action or decision in a critical moment that determines the future knowingly or unknowingly — may be taking place.

The countries in the Middle East perhaps are coming to realize that none of them is able to dominate the region. For very long time, Saudi’s wealth and weaponry has been appearing to be outstanding. Yet, it is so weak when it is in need.

While some analysts may think the oil attack would intensify the tension in the Middle East, I hold an opposite view because China has shown its strength and also a strong intention (the Belt and Road Initiative) of bringing peace to this zone.

As regards the meaning of the word ‘strength’, among many other issues, take a look how China is capable of helping Syria:

“… Friday (Sep 6) also saw the conclusion of the 61st Damascus International Fair, an event of which the U.S. warned it may sanction any participant. Despite this threat, among those that attended included Belarus, China, Cuba, Indonesia, Iran, Iraq, North Korea, North Macedonia, Oman, Pakistan, the Philippines, Russia, the United Arab Emirates and Venezuela, the latest target of the Trump administration’s so-called “maximum pressure” campaign…” (Newsweek)

As peace is returning to Syria, with support from Russia and China, “France’s Louvre Hotels Group has signed an agreement to open two hotels under its own name in Damascus …” (The Local France news on 15 Sep 2019).

The reality is that China (together with Russia) has shown its willingness and ability to bring peace, stability and prosperity to the Middle East, although some Western salesmen for the purpose of selling more expensive weapons keep on stirring spats here.

The road to long term peace in the Middle East is to be decided by Riyadh.

Like Loading...
‹ China is speeding ahead with plans for stealth fighters on its aircraft carriers
China and India demand $100 billion for climate action on eve of UN summit ›