China’s crimes are against humanity, not U.S. economy 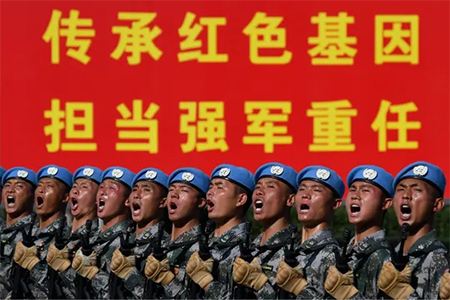 Everyone has heard about China as an economic superpower bent on world domination. Its trade surplus with the world, especially with the United States, is vulgar.

And for some time, China has been the fastest growing economy in the world, with some authorities referring to it as the world’s second largest economy.

But there is another side to the story, and on the occasion of the 70th anniversary of the People’s Republic of China (declared by Mao Zedong on Oct. 1, 1949), the other side of the story is appropriate to consider.

Chinese communism was (and is) very inward. Under Mao, China paid lip-service to the ideal of worldwide revolution. But Mao was more concerned about his country’s borders, including communist neighbors like North Vietnam and the Soviet Union.

Mao paid little attention to the United States, except to make the fatalistic claim that he had more people to sacrifice in a nuclear war.

Mao was genocidal to the degree of Hitler and Stalin. From the time of his “Anti-Rightist” movement in the mid- to late 1950s, to his “Great Leap Forward” from 1958 to 1960, and to his hideous “Cultural Revolution” from 1966 until his death in 1976, Mao was responsible for up to 70 million deaths.

Starvation was the main product of the Great Leap Forward. Farms were forced into collectives, which limited food production and precluded the agricultural workers from engaging in the sale of livestock (denouncing the practice as a capitalist plot).

When it came time for the Cultural Revolution in 1966, mass purges of government officials were conducted on a level not seen since those of Stalin in the Soviet Union in the 1930s.

Conventional wisdom is that Nixon pried open the door to China in 1972 and economic freedom flourished. But it was slow to develop. Whereas China’s international trade today is a multi-billion dollar enterprise, its foreign trade by the time of Mao’s death in 1976 was still negligible.

Deng Xiaoping, who came to power in 1978, introduced capitalism in a big way to China. And China’s huge role in today’s world economy is more the legacy of Deng than any other player. But China has by no means ceased to be Maoist.

Despite capitalism, China remains 70 years later very much a communist behemoth. Its jails are packed with dissidents, and religious freedom is non-existent.

Christianity and Islam are suppressed, along with the Falun Gong spiritual movement. Capitalism notwithstanding, the People’s Republic of China practices unambiguous communism.

Perhaps the overall lesson to be learned from China is that, while capitalism induces prosperity, it does not induce liberty. Today, China’s economy is a mercantilist oligarchy.

The irony is that whereas the People’s Republic of China never made global communism a high priority, it has made economic domination a stated goal. President Xi Jinping makes much of his China 2025 project, the aim of which is to make China the world’s premier high-tech source, surpassing even the United States.

So is President Donald Trump right to nurture fear of China? Not really. Indeed, his concern about China is excessive.

Though China is often referred to as the world’s second largest economy, that claim is hardly irrefutable. As reported in the Wall Street Journal, China’s per-capita GDP is $10,000, much lower than not only that of the United States (which is $62,000), but lower than the capitalist Asian entities such as Taiwan ($26,000), South Korea ($32,000), Japan ($41,000), and even the communist country’s own province of Hong Kong ($49,000). And though China has the world’s fastest growing economy, its 6% annual growth rate is down from its double digit rate in recent years.

While the People’s Republic of China is an undeniable force in the world, its crimes are still more of a humanitarian nature than of an economic agenda. Rather than grieve the number of widgets China refuses to import, the main concern over China should be the number of people subjected to its brutal oppression. Seventy years later, the People’s Republic of China is still very much a regime created in Mao’s image.

Like Loading...
‹ Some Chinese electric cars are ‘simply worthless’ says industry body
Escaped prisoner found living in cave in China after 17 years on the run ›