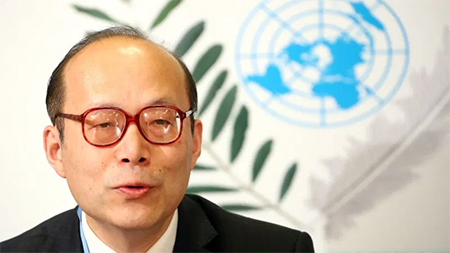 China’s ambassador to the United Nations revealed Wednesday that Beijing will block international investigators from examining the origins of the Wuhan coronavirus until “final victory” over the pandemic has been achieved.

“The top priority, for the time being, is to focus on the fight against the pandemic until we win the final victory,” Chen Xu told reporters when asked about the status of the World Health Organization’s requests to study the origins of the virus. The WHO’s representative in China said last week that the Chinese Communist Party has blocked repeated requests from the organization to investigate.

While Xu added that China is not “allergic” to outside probes, he admitted that “for whether or how the invitation will take place, we need to have the right priority setting at this moment, and on the other hand, we need the right atmosphere.”

The CCP has been accused of covering up the origins of the virus, with multiple reports detailing the timeline of Beijing’s failures in slowing the initial spread, including one study that found China could have prevented 95 percent of coronavirus infections if it had acted sooner.

An intelligence dossier compiled by the Five Eyes intelligence agencies of the United States, Australia, New Zealand, Canada, and the U.K. levels multiple accusations against the Chinese government, including “the suppression and destruction of evidence . . .  the genome sequence not shared publicly, the Shanghai lab closure for ‘rectification’, academic articles subjected to prior review by the Ministry of Science and Technology and data on asymptomatic ‘silent carriers’ kept secret.”

China has countered claims of wrongdoing by claiming it is a “victim” of disinformation and trying to shift the focus to a conspiracy theory that the virus originated in the U.S.

“Peddling disinformation and recrimination are by no means prescription for international anti-pandemic cooperation and should be rejected by all,” the Chinese foreign ministry tweeted last week.