Home › Politics & Law › As ‘not-re-elected’ Trump may refuse to quit, Beijing is preparing for US chaos

As ‘not-re-elected’ Trump may refuse to quit, Beijing is preparing for US chaos 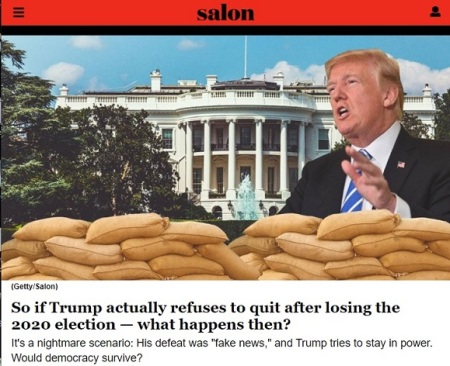 Sandbags for battle around the White House (image captured from Salon)

“… the military will escort Mr. Trump out of the White House if he loses the election and doesn’t leave …” said Joe Biden when being asked about such a scenario (CBS News June 11).

Do not be so naïve because should Trump really refuse to step down, he probably had had some sort of plans for action.

Guessing Trump would refuse to accept defeat has been the topic of no less than 14 articles on the mainstream US media since early 2019 (CNN Feb 23, 2019).

The two latest essays are from Washington Post in May and the Atlantic Monthly in Feb 2020. The former ponders “… if he claimed to be the victim of a rigged election and a deep state plot …”, and the latter is worried that “… there will never be a peaceful transition of power …” and Trump’s supporters will carry out “… deadly acts of violence …”

At least three chaotic scenarios may happen before and after Nov 2020.

The first is that Trump can get re-elected smoothly or with affirmation by the court after some types of controversies. If so, the Left-wing will launch massive and widespread rallies to express their angers. Cities and towns, or even states, may proclaim themselves as ‘no-Trump’ zones, something similar to the current Seattle autonomous zone where the sign “You are leaving the USA” can be seen at the entrance. It has been reported that the protesters there “are armed” (Daily Beast June 14)

It is almost certain that the Antifa (regarded as a domestic terrorist group by Trump) will escalate their violence against the federal government, and the ‘Yes California’ will seek for secession more proactively.

The second chaotic scenario is that Trump loses the election but refuses to admit defeat. He has many reasons to claim the election is unfair and one of the excuses is probably the ‘Mail-in Vote’ (CNN May 26).

There are three key unknowns. Unknown One is what Trump would do during the period from Nov 2020 to Jan 20, 2021 (the inauguration day of the new president). Although it is a transitional period, he is still a legally valid commander-in-chief of the military.

Unknown Two is the move(s) of Trump’s die-hard supporters. Bear in mind that most of them possess guns and heavy weapons. Members of the boogaloo movement have been reported by the media that they are ready to engage into the second Civil War.

Unknown Three is the action to be taken by those pro-Trump uniform officers. The ‘Abolish ICE Movement’ and the boiling hot ‘Disband Police’ reform both target the uniform organizations. Although those at the top are still speaking with the ‘politically correct’ terms, it is uncertain how they really act in crisis, and how the middle ranks and the foot soldiers behave, when there are widespread Left-wing demonstrations across the country.

The third chaotic scenario is that the general presidential election has to be cancelled owing to uncontrollable nation-wide unrests. It is very likely to happen if the opinion polls consistently show that one candidate has a crystal clear lead over his opponent. The supporters of the losing candidate may flood the streets of the cities and attack government buildings etc.

An analyst suggested that in such a case, one of the constitutional solutions is to let all the federal and state congressmen and congresswomen form an electoral college, and the candidate who receives more ‘elector votes’ should become the legitimate president for the next four years (Vox June 3).

Suppose this arrangement which is in line with the Constitution happens, but still nation-wide chaos cannot be stopped because either side can reject the result for absence of universal suffrage.

Sensible leaders of all other countries have been preparing for these chaotic scenarios in the United States before and after Nov 2020, and those in Beijing are no exception.

Financially, Beijing is preparing for a stock market collapse, a US Treasury Bond market crumble, and a currency market mess. The status of RMB vs USD will be the focus.

Economically, Beijing is preparing for troubles in trade and continuity of recession. It is perhaps why the German Chancellor Merkel had to hurry in solidifying the German alliance with China by phoning President Xi on June 3 and then held a video conference with Premier Li on June 11. Something very important have been happening.

Politically, Beijing is preparing for a fundamental change to international relations. The West is about to be challenged by the rise of Eurasia led by the Russia-Germany-China alliance.

Militarily, Beijing is preparing for possible combats in, say, the Korean Peninsula, the Middle East, and Latin America. The Taiwan Strait, of course, is also subject to serious consideration.

An image of sandbags defending the White House (Salon June 23, 2019) implies that Trump will not simply wait to be moved out of the White House by the military. Will you get more prepared for all these changes?