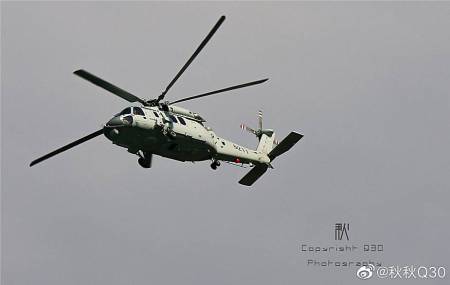 According to pictures released by the China Defense Blog on June 20, 2020, the Chinese Navy has commissioned Z-20F also called Z-20J by other Chinese sources, a naval version of the Chinese-made Harbin Z-20 medium-lift utility helicopter produced by the Harbin Aircraft Industry Group (HAIG).

A picture of the naval version of the Z-20 was unveiled on the Twitter account of Mike Yeo on October 14, 2019.

The new Z-20F helicopter is a modified version of the Z-20 designed to perform Search And Rescue operations like the American SH-60 Sea Hawk helicopter.

The Z-20 layout is very similar to the Black Hawk helicopter but there are several key differences including a five-bladed main rotor and more angular tail-to-fuselage joint frame, giving it greater lift, cabin capacity, and endurance than the Black Hawk, as well as a fly-by-wire design.

The Z-20 helicopter is powered by two Chinese-made WZ-10 turboshaft engines. The engine is expected to deliver a maximum power of 1,600kW. It can fly at a maximum altitude of 4,000 m.

The Z-20 has a crew of two and can accommodate around 12-15 fully-equipped troops. It has a payload capacity of around 5 000 kg. It can carry around 1,000 kg internally and 4,000 kg externally. It can transport various loads, such as vehicles and artillery pieces underslung externally.

The Z-20J can be operated from the small decks of warships. According to information released by the Drive website, it features apertures for a missile approach warning system (MAWS) and it has a landing gear arrangement similar to SH-60B/F and MH-60R Seahawks.

A square hole similar to those found on Seahawk and other maritime-optimized helicopters that use the RAST (Recovery Assist, Secure and Traverse) system for recovery is also clearly seen.

The helicopter’s tail boom holds a number of features, including a downward-facing UHF communications antenna and a directional data-link antenna under a dome. These are key components that give the Z-20F the capability to send large amounts of information to receivers that are located on the surface of the earth within line-of-sight.”