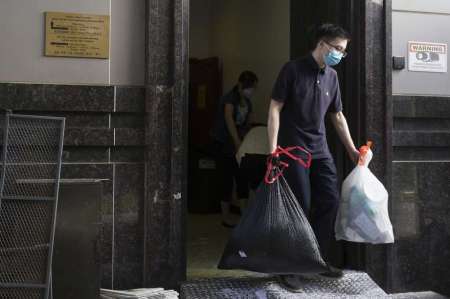 China’s Houston Consulate Being Cleared Out

Senior US government officials said Friday that a Chinese scientist who had been hiding in the country’s San Francisco consulate after accusations of visa fraud is now in US custody and also charged that Beijing has been using its diplomatic outposts to run an espionage network to steal intellectual property from US businesses, universities and research centers.

Tang Juan, a researcher who said she was focusing on biology, “was a fugitive from justice until last night,” a senior Justice Department official said, but has now been charged in Sacramento. The circumstances of Tang’s arrest were not clear, but she has not been charged with espionage.

US officials made the announcement just hours before Washington’s deadline for Beijing to shutter its consulate in Houston, a move that triggered China to retaliate Friday by demanding the US close its consulate in Chengdu.

Prosecutors earlier this week said that Tang concealed her connection to China’s military in order to enter the US, lied to federal investigators about those links and subsequently tried to avoid arrest by taking refuge in the San Francisco consulate.

During an interview with FBI agents on June 20, “Tang denied serving in the Chinese military, claimed she did not know the meaning of the insignia on her uniform, and that wearing a military uniform was required for attendance at FMMU because it was a military school,” attorneys wrote in a July 20 court filing.

But in a search of her home and electronic media, FBI investigators “discovered photographs of her in the uniform of the Civilian Cadre of the Chinese People’s Liberation Army (PLA)” and that she had been employed as a researcher at the Fourth Military Medical University.

She was charged with one count of visa fraud on June 26.

The US officials also said Friday that China’s Houston consulate was implicated in a fraud investigation at a Texas research institution. They charged that consulate officials “were directly involved in communications with researchers and guided them on what information to collect.”

The activities in Houston “are a microcosm, we believe, of a broader network of individuals in more than 25 cities. That network is supported through the consulates here,” the Justice Department official said. “Consulates have been giving individuals in that network guidance on how to evade [and] obstruct our investigation. And you can infer from that the ability to task that (a) network of associates nationwide.”

The officials spoke a day after a speech by Secretary of State Mike Pompeo that recast the US-China relationship in starkly competitive terms, telling an audience at the Nixon Library in California that “securing our freedoms from the Chinese Communist Party is the mission of our time and America is perfectly positioned to lead it.”

Referring to Chinese President Xi Jinping, Pompeo said: “We must admit our truth that should guide us in the years and decades to come, that if we want to have a free 21st century, and not the Chinese century of which Xi Jinping dreams, the old paradigm of blind engagement with China simply won’t get it done,” he said. “We must not continue it and we must not return to it.”

The idea to close the Houston consulate emerged this spring after China interfered when US officials returned to the consulate in Wuhan, closed due to the coronavirus pandemic, to retrieve diplomatic materials, a senior State Department official told CNN.

Chinese authorities refused to let the US officials leave Wuhan with the pouches, saying they had to search them before leaving, an aggressive move that violates the Vienna Convention, which governs diplomatic relations. The encounter left Pompeo irate, the State Department official said.

The senior Justice Department official acknowledged that the US move against China’s espionage won’t yield many arrests. “By their very nature, consulates are a base of operations for foreign governments in the United States, including the intelligence services,” the official said, but “the sum total of the Houston consulates activities went well over the line of what we’re willing to accept.”

The official noted that although the activity of concern is illegal, it is “not necessarily amenable to criminal charges, among other reasons because of the diplomatic immunity that consulate officials enjoy.”

“You’re not necessarily going to see many prosecutions tied specifically to the Houston consulate as a means of disrupting that activity,” the official said in a call with reporters. “That tool just isn’t as available to us in this context as it would be elsewhere.” The official added that “the public examples and what I’m discussing here today are merely the tip of the iceberg at Houston.”

The US has given China until Friday afternoon to close the Houston facility. The Justice official said that unless the US “disrupted” the activity at the consulate there, it “threatened to become even more aggressive in Houston and at other Chinese consulates nationwide.”

“Our focus is on disrupting this activity out of Houston as well as deterring similar activity by Chinese officials and other consulates,” they said in the call with reporters. “Closing the Houston consulate and presenting relocation of those officials accomplishes both of those goals.”

Espionage on a massive scale

A senior intelligence official who took part in the briefing for reporters said that the sheer scale of China’s activity also means that the US is “not going to arrest our way out of” the challenge posed by Beijing’s espionage activities. “The problem posed by China is too large, so we’ve changed our tack to focus on communication and understanding,” they said.

This official said that the US has seen a 1,300% increase “in cases related to economic espionage and China over the last 10 years.” A lot of that increase is due to “enhanced communication and understanding of the threat,” rather than a marked increase in Chinese activity, this official said.

The senior Justice Department official told reporters that “of all the cases we’ve brought over time alleging the theft of trade secrets, about 60% of those cases have some connection to China.”

That official said that in 80% of those cases, the US has “the unclassified proof that allows us to allege that the crime was intended to benefit a government.”

“We have, over time, seen consistently that China, meaning the People’s Republic of China government, as well as the companies doing business there, represent a disproportionate share of our trade secrets and economic espionage prosecutions,” they said.

The Justice official said there was no one event that led the administration to decide to take a tougher line on the Houston consulate. The government could not pick a “straw that broke the camel’s back,” the official said. “It has been an increase in malign activity, intelligence activity over time. And at some point, you say enough is enough … and then you decide who is one of the worst offenders.”

China struck back on Friday morning, when its Ministry of Foreign Affairs of China told the US Embassy in Beijing that it was withdrawing consent for the establishment and operation of the US Consulate General in Chengdu. The Foreign Ministry did not comment on whether the consulate had to be closed in 72 hours, instead saying “specific requirements” were outlined.

China accused US consular personnel in Chengdu of interfering in China’s internal affairs and harming its national security interests. US personnel at the consulate “engaged in activities inconsistent with their identities, they interfered in China’s internal affairs, and harmed China’s national security interest,” said Wang Wenbin, a spokesperson for China’s Foreign Ministry.

The best scenario, in the view of US officials, would have been if the Chinese had forced the closure of the US diplomatic facility in Wuhan — which is the sister consulate to China’s outpost in Houston — given that it is already vacant due to the coronavirus pandemic.

There were about 60 Chinese officials at the Houston consulate, the official said. They will have to evacuate the embassy by this afternoon. All the officials, along with their families, have 30 days to leave the country.

Source: CNN – Chinese fugitive taken into custody as US claims Houston consulate was a part of espionage network

Like Loading...
‹ Why is Xi Jinping pitting China against the world?
Stealth UAVs could give China’s Type-076 assault carrier more firepower ›