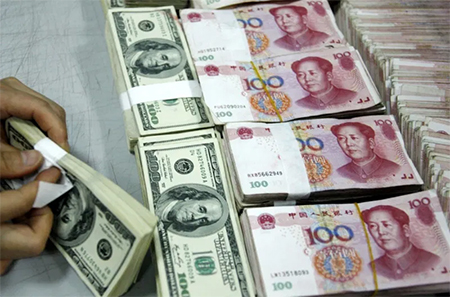 There was much ado on Bloomberg and other financial news services when the People’s Bank of China (PBoC) announced last Saturday that financial institutions no longer need to set aside cash for risk reserves when purchasing foreign exchange for clients through forward contracts starting on Monday.

The move was widely interpreted as signaling the PBoC’s intention of slowing down a forceful rally in the offshore deliverable yuan (CNH) from 6.84 to the US dollar on September 25 to 6.68 on October 12.

Alas, it proved much ado about nothing … or at any rate nothing much. The PBoC on Monday morning set central parity for the onshore traded CNY at 6.7126 to the USD, up from 6.7796 on Friday October 9 and the strongest level since April 2019.

The PBoC uses the morning fixing of central parity to signal its policy intentions and to assume that it signals a major move up when it meant to push the exchange rate down is a bridge too far.

And if Monday’s fixing was not a signal enough about the yuan’s preferred direction, Tuesday’s fixing at 6.7296 when the offshore currency traded in the 6.74 range should have been proof enough.

Most likely the PBoC’s move on Saturday was undertaken to allow companies and financial institutions to relieve some temporary dollar shortages. That has the side effect of slowing the yuan’s rise, but certainly does not imply a policy change, but simply to disabuse traders of the idea that an ever-rising yuan is a safe one-way bet.

There is no policy reason why the government should want a cheaper yuan. A strong and rising currency is precisely what China needs at this point in time when a secular shift to domestic demand as part of the “dual circulation” economy announced on August 10 is being pursued.

This was once again emphasised in a major policy speech by President Xi Jinping in Shenzhen as part of his Southern Tour, which celebrates the 40th anniversary of the Shenzhen Special Economic Zone that was designated as the proving ground for a market economy by Deng Xiaoping.

Shenzhen and the Greater Pearl River Delta, including Hong Kong and Macau, will develop into China’s and East Asia’s “technology and industrial high ground,” Xi announced.

China will achieve technological independence, he said, but not by closing itself off to the world, but by inviting the greatest degree of foreign participation.

The CNH is trading at 6.7251 at 7pm HK time and shows no signs of weakness, intended or otherwise.

A Biden victory in the November 3 elections, which looks all but certain, points to a weaker dollar as the US debt load will increase unabated. The Xi policy of stimulation of domestic demand and high tech solutions for the economy point to a stronger yuan.

I see no reason to change my forecast of the yuan moving closer to my 2-year (or earlier) target of 6 to the US dollar.