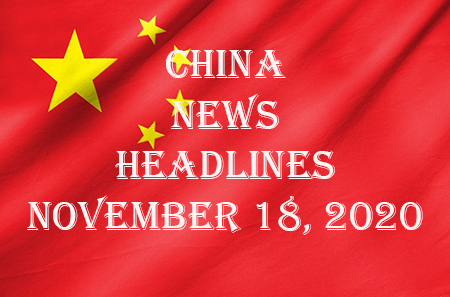 ‘A coup for China’: Analysts react to the world’s largest trade deal that excludes the U.S.

Vaccine Unproven? No Problem in China, Where People Scramble for Shots

‘We Are Shipping To The U.S.’: Inside China’s Online Synthetic Drug Networks

U.S. companies with China operations look to the Asian giant for growth

How popular is China in Africa? New survey sheds light on what ordinary people think

Erskine Academy in China to go fully remote until Nov. 30

Hong Kong resignations: ‘This cannot be the end’

River rescue diplomat ‘fastest to get shoes off’

US and China’s blame game over the environment

Tracking the global pandemic: Where has been hit hardest?

River rescue diplomat ‘fastest to get shoes off’

Biden vows to set ‘rules of the road’ on trade

Hong Kong resignations: ‘This cannot be the end’

Biden says US and its allies need to counter Chinese influence

Why is Asia-Pacfic’s new trade deal so important?

Taking off: UAE to start daily flights to Israel in March

How 1MDB fugitive Jho Low tried to bargain for his freedom

‘This is a serious matter’: China ban keeping wine exporter awake at night

US securities regulator pushes plan that could delist Chinese firms

European leaders call for unity with US against China

China now has the nuclear strength to hit back at a first strike: PLA colonel

World’s biggest trade deal signed – and doesn’t include US

China-India border dispute: are both sides breaking the deadlock?

Taiwan fighter thought to have crashed into sea after take-off

US securities regulator pushes plan that could delist Chinese firms

China-Australia relations: Canberra reached out to Beijing at ‘every possible level’, minister says

China gets rocket ready to launch ambitious mission to the moon

Like Loading...
‹ Beijing’s moves and lesson amid US post-election chaos
Trump has helped set up, strengthen Russia-China-Iran Iron Triangle ›