Home › Defence & Aerospace › If the US went to war with China, who would win?

If the US went to war with China, who would win?

A great deal has been written about the possibility of a war between the U.S. and China. It tends to be measured in theoretical terms, and much of the analysis centers on exactly when it might occur. But the vital question is really quite simple: who would win?

Of course — no one really “wins” a major war. But the best way to avoid having to go to war at all is to convince your potential opponent that they almost certainly would be the biggest loser. The military balance between China and the United States is complicated, and requires thinking about budgets, numbers of warships and aircraft, geography, alliance systems and technology — especially undersea capability, cybersecurity and space.

Let’s start with dollars and yuan. The U.S. defense budget is fairly transparent, at least in terms of total dollars. Defense spending was around $714 billion in the 2020 fiscal year — and is likely to increase to $733 billion in 2021. Somewhat opaque, China’s defense spending is certainly smaller, with this defense budget set at 1.36 trillion yuan ($212.6 billion), a 6.8% increase from the previous year.

But China does not have the high personnel costs of an all-volunteer force, and their military activities are largely focused on East Asia, not the very expensive global footprint of the U.S. military. And a significant level of their spending does not appear “on the public books.” Overall, in terms of resources, the U.S. has an advantage, but it is not as overwhelming as it appears.

In terms of simple numbers of warships, China is already leading the U.S., roughly 350 to 300, in combat vessels. And the Chinese shipyards are pumping out new warships on a near-weekly basis, especially relatively low-technology patrol missile boats, corvettes and frigates. Still, U.S. ships are ton-for-ton larger, endowed with better offensive and defensive systems, and manned by far more experienced crews. 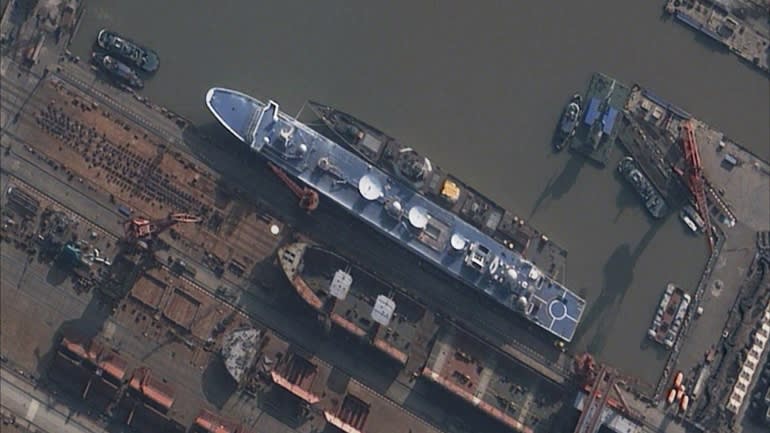 A guided missile destroyer and a space tracking ship are tied up at the construction basin of the Jiangnan Shipyard: Chinese shipyards are pumping out new warships on a near-weekly basis.

Additionally, the U.S. has a very sophisticated network of command-and-control capabilities to knit together its long-range aviation platforms alongside surface warships and, of course, submarines. When factoring in the tight geography of east Asia, I would say slight advantage China in terms of pure numbers of platforms both sea and air, with the U.S. having higher quality of assets.

Geographically, China enjoys a great advantage in a potential conflict with the U.S. in the South and East China seas. Notably, China would be able to support its warships logistically in terms of fuel and ammunition, provide combat repair facilities nearby and move sailors on and off their ships with ease. For the United States, lengthy supply and manpower chains would bedevil U.S. forces, even allowing for the presence of U.S. bases close by.

Additionally, the string of artificial islands built by China throughout the South China Sea would somewhat balance the U.S. bases in South Korea, Japan and Guam. The U.S. Navy, by the way, does not refer to the roughly 10 Chinese “islands” as artificial islands — rather, they are thought of as unsinkable aircraft carriers.

Indeed, a great deal of U.S. tactical and strategic warfighting thinking is going into how to neutralize those facilities, with one thought being to deploy U.S. Marine special forces — Marine Raiders — to destroy their offensive capability early in a fight. While the U.S. would try to make up for its long logistic tail by engaging our allies, geography is clearly a factor that favors China.

How about alliances? The U.S. has long felt that its greatest comparative advantage over China is its network of allies, partners and friends around the world. In Asia, that means strong support from Japan — the third-largest economy in the world, Australia — very capable naval forces, South Korea, Singapore and many others. The U.S. is also strongly cultivating India via the Quad concept of aligning it with the U.S., Japan and Australia. Yet how much the U.S. could count on such partners in the face of a Chinese attack is a growing question.

Additionally, China is increasingly taking a page from the U.S. and strengthening its systems of partnerships. The Belt and Road Initiative is designed to do exactly that, and the Chinese are making inroads both in Asia and the east coast of Africa. Most importantly, Beijing is consolidating its relationships with Russia — the two nations frequently exercise together militarily, Iran — China just announced a $400 billion investment, Pakistan and the Philippines — President Rodrigo Duterte seems to favor China in many issues over the U.S., nominally a formal treaty ally.

Overall, the U.S. allies are bigger, richer and have stronger militaries, so an advantage for Washington — but the gap is closing.

Finally, and most importantly, victory in a U.S.-China war would be highly influenced by who has the best technology. In the key areas of undersea silencing of submarines, numbers of military satellites in space, offensive and defensive cyber tools and unmanned vehicles, the U.S. still has the lead. But China is closing fast, especially in artificial intelligence, hypersonic cruise missiles, cyber and the emerging field of quantum computing. The recently released National Commission on Artificial Intelligence is telling in this regard. Again, slight — but closing — advantage to the United States.

Bottom line: If I were the admiral commanding the U.S. Indo-Pacific Command — the leader for all American military forces in the Pacific and Indian oceans — I would still want the U.S. hand of cards to play. But as the Duke of Wellington said of the Battle of Waterloo, a fight with China would be a “near-run thing.” And over the next decade, that gap will close and — if the U.S. does not respond — will favor China.

That is why I set my recent novel, 2034: A Novel of the Next World War, 10 to 15 years in the future. Those alarm bells are going off at the Pacific Fleet headquarters in Pearl Harbor, and watch for U.S. strategic focus, resources and advanced technology to head west in the coming decade.

Admiral James Stavridis was 16th Supreme Allied Commander of NATO and 12th Dean of the Fletcher School of Law and Diplomacy at Tufts University. He spent the bulk of his operational career in the Pacific, and is author of “2034: A Novel of the Next World War.”

If the US went to war with China, who would win? – Nikkei Asia