For all the speculation of quick military action by China to achieve its foreign policy goals, Beijing’s track record has been more akin to peeling an onion, slowly and deliberately pulling back layers to reach a goal at the center.

Think of how Beijing built up islands in the South China Sea and then fortified them, eventually establishing what the former head of the US Pacific Command in 2018 called a “Great Wall of SAMs,” — surface-to-air missiles — on islands that years earlier Chinese leader Xi Jinping had pledged not to militarize.

“Relevant construction activities that China is undertaking in the Nansha (Spratly) islands do not target or impact any country, and China does not intend to pursue militarization,” Xi told former US President Barack Obama at the White House in 2015.

Those militarized islands are also claimed in part by the Philippines, Vietnam, and Taiwan, but none of those places are likely to see their claims realized. The islands — with names like Fiery Cross Reef and Mischief Reef — are essentially People’s Liberation Army bases.

Now Beijing may be slowly peeling back the onion in another disputed island chain, the rocky, uninhabited Senkaku Islands in the East China Sea, administered by Japan and known as the Diaoyus in China.

Chinese Coast Guard and even naval ships have been spending record amounts of time in the waters around the Senkakus this year, according to the Japanese Defense Ministry.

Earlier this week, a People’s Liberation Army Navy (PLAN) frigate entered the waters in the contiguous zone around the Senkakus for only the fourth time since 2016, Japanese officials said.

A contiguous zone covers waters between islands that do not fall into the 12-nautical-mile limit of a nation’s territorial waters. Foreign warships are allowed into those waters — so the Chinese navy hasn’t broken any international agreements — and China’s Foreign Ministry told CNN earlier this year that the Chinese Coast Guard’s patrols in the waters surrounding the islands were “an appropriate exercise of China’s sovereign right.”

China attempted to demonstrate that right on Monday when it warned a frigate from the Russian Navy to leave the very same waters, a Japanese official said.

“Beijing’s goal is to establish and demonstrate effective control over the Senkaku Islands” and it needs symbols of that control, said James Brown, an associate professor of political science at Temple University in Tokyo.

“Sending its frigate to monitor the activity of the Russian ship could be interpreted as one such symbol of control,” Brown said.

The record amounts of time Chinese vessels are spending near the Senkakus make another statement, Brown said.

To present an international legal claim to the islands over Japan, “China simply needs to establish a greater and more enduring presence of its ships in the waters around the islands,” he said.

Although the islands are uninhabited, there are economic interests involved, according to the Council on Foreign Relations.

The islands “have potential oil and natural gas reserves, are near prominent shipping routes, and are surrounded by rich fishing areas,” it says.

Tokyo says its claims to the islands are rooted in history. Japan’s Foreign Ministry website says in 1895 the chain was incorporated into Japanese territory after the government “carefully ascertained that there had been no trace of control over the Senkaku Islands by another state prior to that period.” 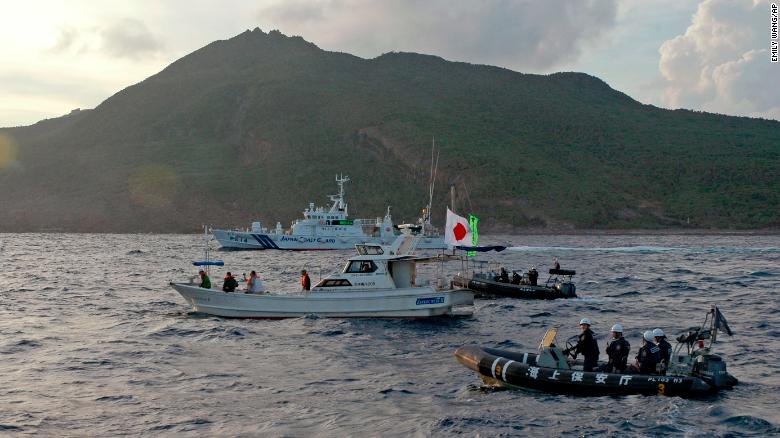 At one point, about 200 Japanese people lived in the islands, further cementing Tokyo’s claims, and China did not challenge Japanese sovereignty over the Senkakus for 75 years, it says.

“This changed in the 1970s, when significant attention was drawn to the islands due to the potential existence of the oil reserves in the East China Sea,” the ministry’s website says.

The Japanese Coast Guard said its patrol vessels continue to deliver warnings to the Chinese ships to leave. And Tokyo has said it has protested the Chinese presence near the Senkakus through diplomatic channels.

But China has given no indication it’s prepared to negotiate over the islands.

The country’s Foreign Ministry maintains the islands are China’s inherent territory, and has accused Japanese fishing boats of making “repeated intrusions” into the area.

And sending Chinese warships to patrol and monitor the waters around the islands “is an act of safeguarding national sovereignty,” Zhou Yongsheng, a professor at the Institute of International Relations at China Foreign Affairs University, told the state-run tabloid Global Times on Monday.

So Tokyo’s protests are just words. And if Beijing ignores them and keeps on peeling the onion, Tokyo is only left with options it doesn’t have the stomach for, Brown said.

He pointed to a 2010 incident in the islands, when a Chinese trawler rammed two Japanese coast guard vessels. Japan arrested the trawler’s captain but he was later released without charge in the face of a series of escalatory measures from Beijing, including an unofficial ban of the export of vital rare earth metals to Japan.

Tensions remained high for three months, and the Japanese government came under strong domestic protest for its handling of the incident.

“Japan will not risk a repeat of the collision incident,” Brown said.

Last year, China introduced a law that allows the Chinese Coast Guard to use weapons to protect national sovereignty, which in a confrontation like that of 2010, significantly expands Beijing’s options. It forces Japan to be even more cautious, according to Brown.

Too much caution can become paralysis. Like the Philippines or Vietnam or Taiwan did in the South China Sea, Japan may fall victim to China’s relentless peeling. 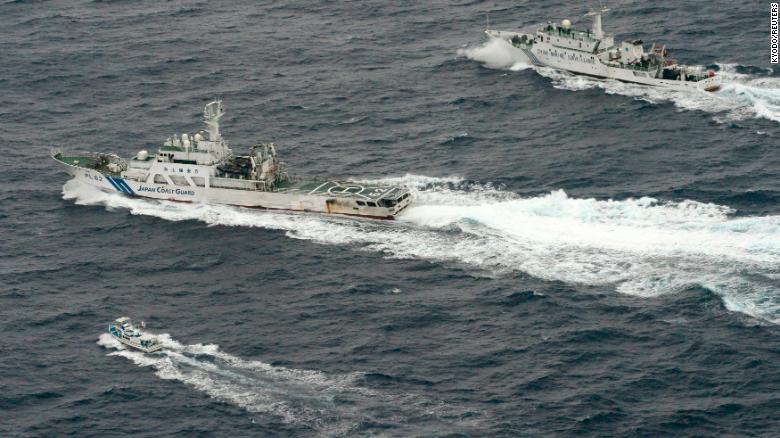 Some may argue that the Senkakus has one layer of protection China may not be able to peel back — the US-Japan Security Treaty, which requires Washington to defend Japanese territory.

Brown said read the fine print on that — and then consider possible Japanese paralysis.

And at that point, the onion will not only be peeled, it will be chopped.